Who are the 100 most influential people in wind? Find out now! 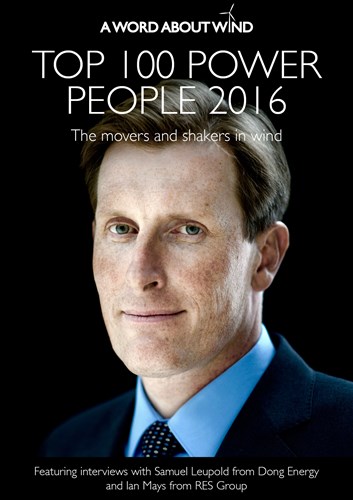 Today is the day! Yes, the US people finally get to vote in the presidential election.

And, more importantly, we are publishing our Top 100 Power People. Now in its fifth year, this is our definitive look at the wind industry’s most influential power-brokers.

The two events are not completely unrelated. One of our biggest findings from this year’s Top 100 is that one-third of the top people involved in the wind sector are based in the US; and more than half work for companies involved in North America, as either their primary or secondary market. The key reason for this is that the US wind sector has experienced a strong year following the five-year extension of the production tax credit in December.

That said, the European market remains key. More than the 60% of the Top 100 work for companies based in Europe, in particular in the UK, Germany and Denmark. They are from a wide range of firms including developers, investors, manufacturers and utilities.

And these are not the only headline statistics on the Top 100.

One of these is Samuel Leupold, who is head of wind at Danish utility Dong Energy and has played a key role in a series of the offshore sector’s most significant deals of 2016. You can find out more about his career and Dong’s strategy in an interview in the report.

And we have also have an interview with Ian Mays, who was chief executive of RES Group until stepping down from the role last month. He led the company into sectors including onshore wind, offshore wind, solar and others during his 36 years at the helm; and we have spoken to him about what happens next for global renewables, RES and himself.

So they are two of the top 100 – but you will have to log in now to find out the other 98! With more high-level insight and analysis than ever before, you won’t want to miss out.